Bring Me Your Poor, Your Tired, Your Abandoned Poems

Here's how it works: you, the poet, drop off an abandoned poem by emailing the poor neglected thing to Robert McDonald: robmc1002@yahoo.com. Robert will put it in a nice comfy temporary cage, and then send it out to another poet for random placement. After you have abandoned a poem, take the abandoned poem sent to you, and use it, abuse it, add, subtract, paint over, use the frame but throw away the canvas--however you are inspired to react with and work on and tinker with this poem is fine.

Then we ask that you email the transformed creature back to Robert, that he may post the results on Lives of the Spiders and in doing so share the heart-warming story of abandoned poems taken in by caring poets with several dozens of interested internet readers.

Poets and writers: the abandoned poem can be one you've given up on, forgotten in a journal, left in a drawer for 10 years without air, or simply have to let go of. The original will still belong to you, of course. The transformed version will be its own cool thang, and belong to the writer who took the time and care to train it and make it behave.

PS--We are using "poem" in the broadest sense. Prose writers, feel free to abandon that paragraph of a story that never got going. And to take the poem you get in exchange and wrassle it into prose form. Poem whisperers--ready, set, go! Please invite others to join the project.

Thanks a lot! You'll make some sad deserted poem feel so needed and new.

This is blatant homage/imitation of a project poet Barry Schwabsky has been working on--he asked fellow poets to send him an abandoned or unfinished poem and he would work on finishing it.  There's more explaination of the whole process here, as well as links to some examples of the now "finished" poems.

Schwabsky's essay about this process comes from a website, Likestarlings, which pairs poets up to collaborate.

Let's trade failures and make them unfail. (Photo is my cousin Julie's dog Cain.  He looks like he's sad that any poems fail. And he trusts you to make them better.) 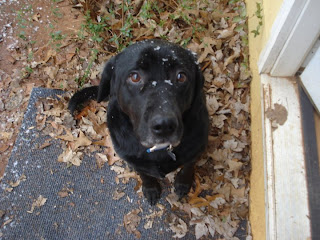