Seven Notes on "Your Father on the Train of Ghosts"

Your Father on the Train of Ghosts is book of poems written in collaboration by G.C. Waldrep and John Gallaher.  I kept thinking I was going to write a wonderful and insightful essay about this book, as I have been reading and re-reading it for the past month or more.  But time flies by, and other brillances attract my attention.  So I figure I'd better just do this in the form of notes before I never write anything about it at all.

1. At 221 pages of poetry, this is a bigger volume than most.  The size is both impressive (Look how much these two poets have created together) and, since it runs counter to expectations re: the length of most contemporary volumes, a tad daunting. (Jesus, that's a lot of poetry to get through.)  While no poems come to mind that I'd want to see cut, the sheer volume makes it more difficult for me as a reader to have a favorite, or favorites.  Maybe that's the point of including so many poems in one book. It says, "I will not be anthologized. These poems are a chain and every link is important." Or maybe, "Roam at will. Stop here at this poem, or don't. There are a lot of rooms in this house, and you don't need to sit down in all of them."

2. Here are echoes of voices I heard while reading these poems. Charles Simic.  Mark Strand, particularly his earlier work. Frank O'Hara, if his "I do this, I do that" poems described vivid dreams, instead of the activities of an afternoon. John Ashbery blurbs the book, but the individual poems, for me, jump around far less than the typical Ashbery poem, which often wants to contain the entirety of everything ever thought or said in it. More modest than Ashbery poems?  Or maybe just boxed in a bit more.

3. It struck me reading these poems that the kind of surrealism I appreciate in them is an American surrealism.  The French surrealists, at first, were struggling to bring the dark unconscious into the light, and it was an undertaking drawing on Freud. All those secrets, and forbidden desires, and animal unknowns: a surrealism  meant to give a voice and shape to the subconscious.  I think surrealism is more often used these days to explain or to depict a known but hard-to-grasp emotional reality. Another way of saying this: these poems are not going to discomfort the reader.

4. I think that in collaborative projects there is often a self-congradulatory tone, or a hyper-preciousness that appears on the page--look at us, look at our cleverness, look at this process and how arty we are being by engaging in it.  This tone is NOT at all present in YFOTTOG. You can't "see" the poems being written in front of you.  If the writers are teasing and delighting one another with in-jokes, if they are delighting in their own creation, they are keeping this to themselves.  The voice in these poems is remarkably singular, and even. I don't think anyone would have known if these were collaborations if the authors had not told us. As a writer, I am very curious about Mr. Waldrep and Gallaher worked together.  As a reader, I think the poems speak for themselves.

5. Students of poetry, behold the importance of a good first line!

More after the jump
Posted by Robert Mc at 8:55 PM 2 comments: Links to this post

Recently, on the World Wide Web

It was a good week for me, on the internet, at least.

At Pages to Pixels, Christian Harder posted a short interview with me about my work and the creative process. I am very happy he asked for the interview, and delighted with how it all turned out.

At Escape Into Life, Kathleen Kirk posted a feature with me, and paired the poems with wonderful collages from artist Carly Bartel.  I am in love with the collages.  I may propose to one soon, if I can find the right ring.

In other exciting news, I found out that peregrine falcons are nesting on the back side of the Uptown Theater near my house.  You can hear the babies crying out to be fed from a block away. Ok, so the falcon discovery did not happen online. But you can see excellent photos of the birds here.

(An award-winning photo by Jerry Goldner.  The link above will show you more of his work profiling these magnificent birds.)

I went to the MCA yesterday, having no idea that one of my favorite artists of all time, Joseph Cornell, had a show devoted to his work and his influence on modern and contemporary art.  In some ways the biggest show there right now, featuring contemporary artist Mark Bradford, could be seen as an extension of the Cornell exhibit--Bradford also works in found material, and the careful creation of art as object.  His large-scale Mithra, created in new Orleans, could be a Cornell box on a much larger scale. 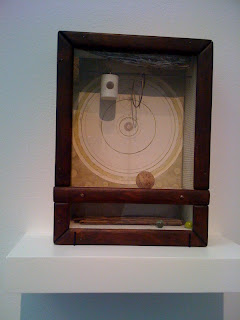 From Joseph Cornell we learn about buildings, repetition, ballerinas, and the moon.  We learn about birds that are captured and birds that break free, and the mysterious nude woman behind the blue pillar. In Cornell's boxes it's always either midnight, or dusk, and someone is looking over your shoulder. The curators mentioned maps, and cages, but no one remarked on how Cornell often called his creations hotels, the oasis you check into, the room which becomes the room outside of daily life, the room outside of time.

In the park across the street: red-winged blackbirds, pigeons, and grackles. That and the raggedy man who mutters to the birds. In the building behind me (I write this on the steps of the MCA) torn scraps of paper, trash made beautiful, made meaning-full, as squares and rectangles of light. Mark Bradford making paintings without paint.


Cornell made collaged movies, too. You can see two of them at the exhibit. Repetition is a form of prayer. Again and again the young child bobbing for apples, the trapeze artists, the dancing. 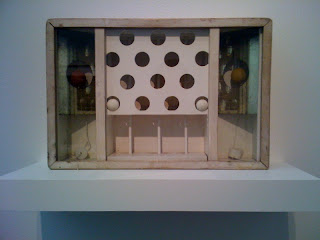 A bird is a form of repetition, one pigeon so much like another, and again. You might come to love and to love and love this dark world, and every lonesome hotel, and every swan who becomes a ballerina in it.

I hate my internet service being out at home.
Posted by Robert Mc at 4:58 PM 2 comments: Links to this post

The Smells of the City 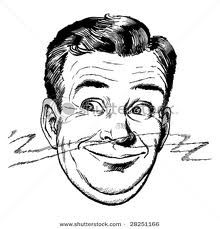 It occurred to me as I walked toward the lake yesterday that the sense of smell needs to enter into my poems more.  Here in the city, in the near-summer: lilacs, honey locust, newly cut lawns. (An entire thesis might be created on the evocations of a newly-mown lawn in June--childhood, fatherhood, chores and green stains) Damp maple seeds on the sidewalk, most of them rotting. Puddles with worms and puddles with motor oil. A whiff of sewer, a blast of perfume from a woman a quarter block ahead. And when I reach the lake itself, the smell of fish and iron. Is there a contemporary poet who delves into scent? An ode to odor?
Posted by Robert Mc at 7:21 PM No comments: Links to this post