1. In the Kingdom of the Sea Monkeys, poetry by Campbell McGrath.

I bought this after seeing him read at the Harold Washington Library a Couple of weeks back. I love his long Whitmanesque lines, and many of his prose poems.  I am not enamored, and I am never enamored, of his poems or anyone's poems about poems and the writing of poems.  I want every poet everywhere to be limited to one poem about the writing of poetry in her lifetime. Write more than that, obviously, but then alter, obscure, and otherwise hid the origin of the poem.  Too much preaching to a choir of one, the self.  Too much  self-inflation.  I believe we must believe we are doing some of the most important business anywhere when writing a poem, and I believe we ought to never say that aloud. So when I run into stanza like:

But the poem one is about to start,
the poem one is going to write
immediately, very soon, perhaps next March,
is like a foghorn calling mournfully in the night.

It makes me cranky.  I feel like the poet has just gone ahead and admitted that no one cares about poetry but other people writing poetry.  That may well be true, but do we have to have that fact pushed in our faces like a grapefruit? It does seem to me that this "poems about writing poetry" phase happens as some poets, often poets of certain renown, begin to age.  Call it the Billy Collins syndrome. I like some of Mr. Collins' work just fine, but he has a lot of these "watch me write a poem" poems.

Thankfully, Mr. McGrath, has plenty in this collection to admire and enjoy. One of the standouts is "Sugar or Blood." He read it masterfully at the reading.  And indeed, on one level it is about a poet's task and responsibility in the world:

I realize that I have never said plainly most of what I truly believe,
I have shied from difficulty and misstated my deepest fears,
I have not borne full witness to the suffering in the streets of the cities
I love,
I have not waled a picket line against the tyranny of greed,
I have been wily and evasive even on behalf of art,
I have not praised the movies in tones equal to the rapture
I have known there...

But if gives place and purchase to a reader who is not firmly placed in the realm of poetry.
McGrath could have said:

My poems never say plainly most of what I truly believe,
My poems shy from difficulty and misstate my deepest fears...  and so on.  I'm glad he didn't.

An aging master, still at the top of his form.  I'm not sure who else in American poetry can construct a poem on the page with such grace, care and beauty in the making, and linebreaks that are at once both inevitable and surprising. In these poems he is not using the persona poems he made his name with--the persona here is a "Frank Bidart" who is lonely, broken-hearted, lion-hearted, determined to continue to wrestle with hard truths and the unsayable, which nevertheless he continues to say. "Poem Ending With a Sentence by Heath Ledger" is one of the best things I've ever read.

3. City of Your Final Destination, a novel by Peter Cameron.

It's such a pleasure, sometimes, to read a novel you have read several times before. Like spending time with a well-known friend. I love this book, about a grad student who travels to Uruguay in an attempt to convince the executors of an obscure writer's estate to grant him permission to write the authorized biography. The grad student, Omar, is from Tehran originally, his family moved to Toronto, and now he lives in Kansas. The executors are the dead writer's wife, his mistress, who lived with the wife after her pregnancy, and the dead writer's gay brother. Omar's arrival is a stone thrown into a pond, and the depiction of the ripples is touching, tender, and funny. Cameron spares his characters not at all, but he loves them enough to make us love them too. His prose has the strength of early Hemingway: to use plank-plain sentences and construct something not showy, but utilitarian and beautiful.


Posted by Robert Mc at 1:35 PM No comments: Links to this post

A Flock of Starlings

Transatlantic is the new novel from Colum McCann. It comes out soon, but lucky bookseller me, I got to read a free early reading copy. His novel Dancer, a novel about Rudolf Nureyev, told in many voices, is among my favorites. I wasn't trying to find a poem, but perhaps inspired by recent projects by Sarah Sloat and these Eliot erasure poems by Jeremy Halinen, this "poem" jumped out at me from a page of Transatlantic:

A flock of starlings--

on the steps of the church.
Posted by Robert Mc at 10:32 AM No comments: Links to this post

Just when I think I am all done with spiders, there's this, prominently displayed at my local thrift/card/framing shop: 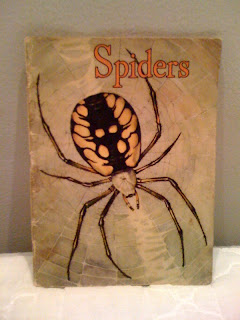 It was not the cover photo that sold me, but the text:

I want to make that into a Grimm fairy tale.
Posted by Robert Mc at 7:02 PM 2 comments: Links to this post


I want to thank you for the miniature horses, I’ll never
know how you so precisely
attach
their wings, and if that material is a kind
of cellophane, or specialized paper,
at any rate it allows them
to hover
in the living room.
like a herd of four-legged wasps.

I also appreciate the firefly reunion pack
you include
with every purchase, it’s certainly added
a splotch of glitz to our toddler’s bedroom,
and I love how you have them trained
to settle
on the headboard and wink
at the window until an hour
before dawn. 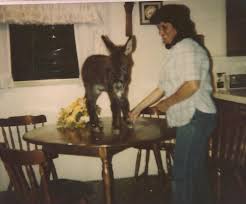