The School of Orpheus is not in any Building 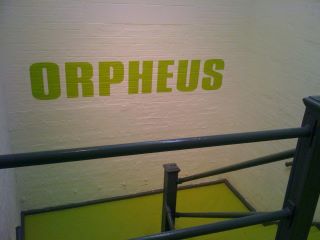 Ann Wroe wrote the book on Orpheus, that magician, demi-god, philosopher, priest, poet, singer, that inspiration, that tragedy, that Argonaut, that sacrificial lamb. Her new book, Orpheus, The Song of Life, is dedicated to everyone who protested, "But Orpheus isn't real."  Using everything from texts from antiquity to poems and paintings from the present day, Wroe demonstrates that an archetype, despite all the blurring of boundaries and definitions  (Was Orpheus based on a real person?  Was he a king?  A Poet?  Did he study at Alexandria?  Did he live in Thrace, or the mountains further north?) despite all the questions, Orpheus is a Being, an Idea, with a lasting influence, a man real enough to inspire uncounted poems, songs, operas, mosaics, paintings, plays, and happenings.  As for scholarly works about the big O, I very much doubt that a better one will be coming along soon. Wroe is learned and erudite, a writer whose mastery of her prose makes the reader feel, this reader, at least, that he's found a text that becomes both a home (comfortable) and a way-station, a place that has the potential to be the start of any number of journeys. Whether you are planning on a trip to Hades to retrieve your one true love, or you want to discover ways to be the enchanted singer of your age--and who at one time or another has not wanted to have a voice that moved the very trees to dance--this is the book you need.  Poets of all sorts, here is Anne Wroe on Orpheus:

The public square was always foreign to him. His school was not in any building, though the boys sitting now on temple steps, smoking and listening to their iPods, may jiggle with the sense of him, as he slides through shaded doorways on the waves of balalaika music kicked up from passing cars. The forest was always his place, or among the rocks; in secret, and most often in the dark.

Here she is describing how Orpheus sang a song that made a forest uproot itself, great trees following behind him like eager dogs:

He led them, then -- scarcely daring to turn, in case they froze behind him -- swaying and stumbling from rock to rock, their canopies full of sky and threshing wings, until they reached Zone on the Aegean Sea. There, in an open space, they arranged themselves in a double ring as though they meant to dance in a spiral, like the planets around the sun. But though he urged them to dance, though he challenged them, laughing and splashing, to follow him into the sea with their hundred hydra arms, they moved no more. Having staggered so far, astonished by the wide blue glare ahead of them, they felt the music leave them, and rooted there.

He could only lead them so far. That is still the case.

I am eager to find out where Wroe's terrific book might lead me.


Posted by Robert Mc at 3:54 PM No comments: Links to this post

I am delighted to have work included in the current issue of Right Hand Pointing.  Always a fine journal to page through.

I also got a copy of the recent Bluestem in the mail--I love having my work at on line journals, but to have the mailman bring me a journal in the mail, and there's the issue, with my name in print, and my bio in the back--well, it's still very gratifying to me, and somehow still more exciting than seeing a poem up on line. Not to knock on line work--Bluestem also published my ode to a snowy night on their web version.You can hear me read it to you there, in case you are too tired to focus on the words on the screen.

Sarah Jane Sloat has some of her poems exploring invented typefaces up at Used Furniture Review. When I read these, it reminded me of her wine descriptions, and made me wish I'd thought of a series like this before she did.  But then, Sarah's writing is so elegant that I guess I can just be glad that she wrote them; my job is just to share the love.

In other news, I got a copy of Lew Welch's recently reissued Collected Poems, Ring of Bone.  Welch is one of the lesser know poets of the Beat/San Francisco Renaissance era, and I'm very happy to be reading and re-reading these poems.  He was a friend of Gary Snyder's, wrote about his affinity for Gertrude Stein, and in his work paid homage to great poets of China and Japan. I'll try and post more about him when I've gone through the book a couple more times.

Ok, I'm off to NYC for the big bookselling conference--flying out at 6 AM tomorrow morning--so I'll leave with this:

John said, "Then I met that short fat guy with the

Lew Welch, from "Circle Poems" in Ring of Bone.