I've been so crazed and busy with work, and worried about parental health and such that I forgot to crow about this--but I have prose poems in the newest issue of New World Writing.  I submitted five prose bits, and editor Frederick Barthelme accepted all five, and lo, there was much rejoicing, much popping of corks and hooray the lad's still got it kind of exclamations among the voices in my head.  Expect more regular updates for a while, as it appears I'll be back to a normal 40 hour week throughout this holiday season, leaving me no excuses for not at least saying hello to the keyboard now and then, just to be friendly. 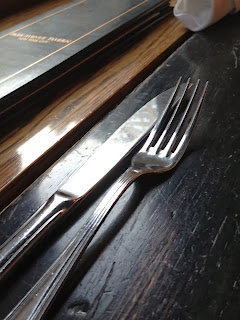 When the dish ran away with the spoon, while the knife and fork went about their daily routine and tried not to speak of such matters.
Posted by Robert Mc at 9:23 PM